Restaurant Tchaikovsky
Tradition with a pinch of innovation!
Discover more

Welcome to Moskva Hotel, a landmark of Belgrade, one of the most important architectural gems of the Serbian capital, built in the style of the Russian secession. Hotel Moskva been under state protection since 1968 as a cultural monument, and since 1979 as a cultural asset of great importance. It was inaugurated by King Petar I Karadjordjević himself in 1908. During its long history, this historic hotel with the famous Café Moskva, has hosted over 40 million guests, including some famous names such as: Albert Einstein, Ana Pavlova, Leonid Brezhnev, Indira Gandhi, Ray Charles, Robert De Niro, Brad Pitt, Bernardo Bertolucci, Maksim Gorky, Kirk Douglas, Michael Douglas, Milla Jovovich and many, many others.

Discover why famous people choose to stay with us.
Enter the luxury world of Moskva accommodation.

The sounds of classical music from the concert piano, where the works of the famous composer Pyotr Ilyich Tchaikovsky are still preserved today, harmonized with the urban vibrations of Belgrade, represent a reflection of our menu. Here, geographical origin is tasted and elegance is served. .

Grains of courage and love for tradition are what make our menu special, while its backbone consists of carefully selected local foods from all over Serbia. With an innovative and modern interpretation of well-known dishes, we promise you an indigenous gastronomic experience.

A word from
executive Chef

“With lots of crazy love and passion, it is the only way to do this job.

Once upon a time, one cherry-lipped beautiful lady walked down the Terazije Square. She had that wondering, long-running look in her eyes. And just right there, few steps towards the “Knez Mihajlova” street, she encountered one almond eyes. Nothing had to be said. It was known right away that a new love was born. The love more tasteful than any before. The love that will inspire a miraculous desert.

This harmony of taste is still hidden exactly where the love began. At Terazije Square in Belgrade - at the Hotel Moskva.

Welcome to “Moskva” hotel’s EVA Spa & Wellness centre, our own Garden of Eden! Cleansed, luxurious and intimate atmosphere, designed to fully cater to your needs and pleasure, was achieved by combining this historic hotel’s recognizable rustic interior with ultra-modern spa solutions. Massages and facial treatments are done by educated professionals using prestigious Pevonia (face and body) and Alessandro (manicure and pedicure) products.

The Hotel Moskva – one of the oldest and the most renowned hotels in our country has existed at the heart of our Capital for an entire century. Simultaneously with the growth and improvement of Belgrade as a city the hotel Moscow has gained a more significant role in its history. Since its opening in 1908, more than 40 million people have passed through this hotel, and approximately 4.5 million guests have stayed in its rooms and suites. Famous and prominent people, who left their mark in history, significantly contribute to this extraordinary statistics. 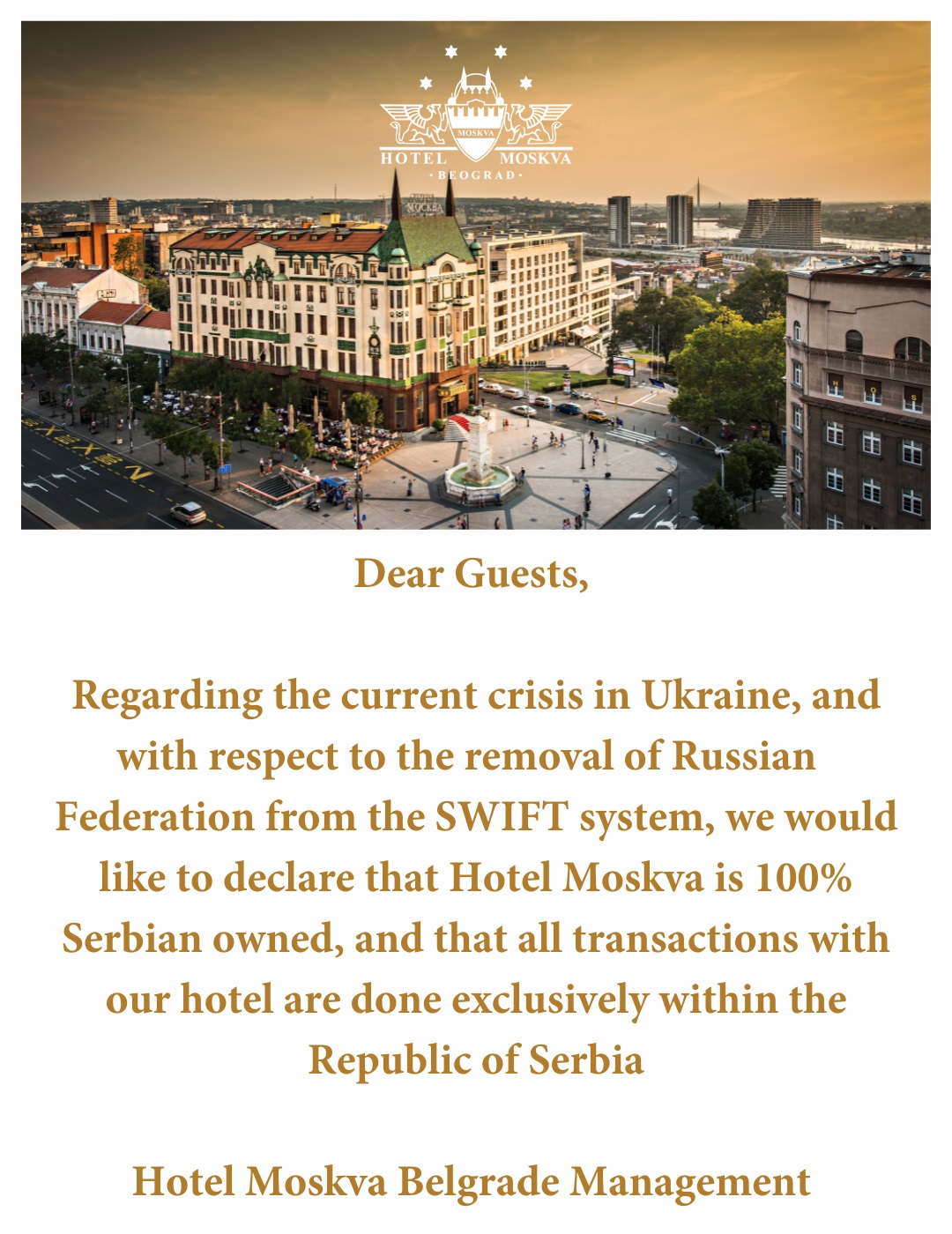